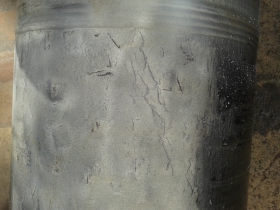 There are cases, when illegal traders sold old pipes, which were exploited earlier (scrap in fact). Before selling, pipes were sandblasting, re-coloring and markings to be issued for new ones. Welded pipes were sold as seamless ones after mechanical removal of (stripping) seam. As far as major construction companies, which purchase pipes, work primarily with government projects, the emergence of problems on-site because of the quality of materials delivered face serious financial and legal consequences.